A NOTTINGHAM car park has collapsed in the city centre leaving several vehicles dangling in mid-air.

Part of a wall and a floor at the NCP Nottingham City car park in Cumberland Place fell away.

Cars have been left hanging off the edge of the car park in nail-biting images from the scene.

There is a 50ft drop below and some vehicles have their two rear wheels off the edge of the multi-storey building in Cumberland Place. 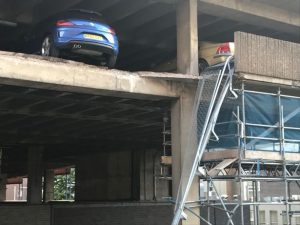 Roger Black, 74, who is from Somerset, said: “I’ve never seen anything like it, the whole wall has completely come away, and part of the floor as well. It’s a good thing it happened in the early hours otherwise it could have been a lot worse.” 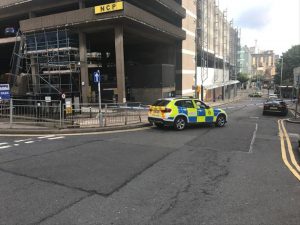 A police spokesman said: “An incident has occurred during the night at our Nottingham City car park, where a part of the front facia of the building has fallen and is blocking the entrance/exit of the car park.

“No one has been injured and no vehicle has been damaged. The fire service and police are working with NCP and the site remains closed until it is safe to re-open.

“We apologise profusely for any inconvenience this has caused to our customers parked with us, and to customers arriving to park with us today.

“We have staff on site who are communicating and helping any customers who have cars inside the building.

“We have structural engineers on site also and are working with the relevant parties to make sure that the car park will re-open only when it is safe to do so.”