Keith couldn’t bear the silence of being at home alone.

“You just can’t imagine what it’s like”.  “You cry a lot. That’s just the way it is because she’s not here.”

So the 94-year-old retired judge decided to install a swimming pool in his backyard in Morris, Minnesota, and now he has so many visitors that his house will never be quiet again!

Jessica Huebner, 36, who lives directly in front of Davison with her four children, says Davidson, a retired judge, never sought notoriety for building the pool – he just wanted a place for the neighborhood to have fun. Davison has three adult children of his own, but no grandchildren, and Huebner says he and Evy were always nice to the kids in the community.

“It’s about spreading joy and happiness to our neighborhood and these children because he sees them as the face of the future”. He is just a very humble and kind man,”  Huebner said.

Davison’s only requirement is that a child’s parent or guardian must be nearby to supervise. Plus, it doesn’t hurt that he can chat with the adults at the same time. 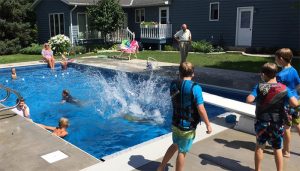 Davison couldn’t be happier with his investment (the average in-ground swimming pool costs $21,919, according to home improvement site Fixr.com). “I’m not sitting by myself looking at the walls,” the widow explained. “What else would you think of doing where you could have a whole bunch of kids over every afternoon?”