A dog in Texas has become an internet celebrity after he was photographed carrying a bag of food down the road in the wake of Hurricane Harvey.

The woman who snapped the picture, Tiele Dockens, uploaded it to her Facebook page on Aug. 26. The dog is seen walking down a rain-soaked and debris-lined street with a big red bag hanging from its mouth.

“This dog is walking around Sinton TX carrying an entire bag of dog food with him. LOL,” Dockens wrote.

The image quickly went viral, racking up over 16,000 likes and more than 34,000 shares.
Later, Dockens posted an update, writing: «Owner is found. He is not a stray just got out on his street.”

Salvador Segovia, who had reportedly been watching his 5-year-old grandson’s dog, came to check on Otis that evening and found that he’d gone missing. 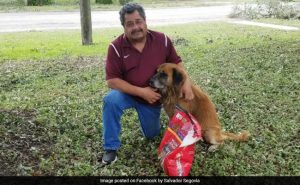 While driving around the neighborhood, Segovia said neighbors approached him about several sightings. He was able to locate Otis and bring him home before his grandson got back, the outlet reported.

Otis is probably about 6 years old, Segovia said. He found the dog when he was just a puppy. A man who was driving around stopped by one day, and said he was planning to just leave the dog somewhere, unless Segovia wanted it.