Keeping up with the self-proclaimed Cuban Kim Kardashian. Social media star Katherine Ferreiro was booked for driving under the influence […]

Keeping up with the self-proclaimed Cuban Kim Kardashian.

Social media star Katherine Ferreiro was booked for driving under the influence in Miami, at about 8:30 a.m. Sunday, according to NBC 6 Miami.

The 25-year-old’s Range Rover reportedly ran a stop sign leaving the South Florida hot-spot. She allegedly kept driving even after officers signaled for her to pull over, the Miami Herald reports.

Police reported smelling alcohol on her breath, at which time they asked her to perform a field sobriety test. 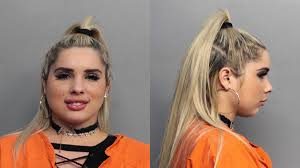 She did not pass, according to the local news outlets.

The arrest report reveals Ferreiro was given two breathalyzer tests. She blew a .198 and .197 respectively, reports say.

Both results are more than two times the legal limit in the state of Florida.

Officers also reportedly found pills in her purse they suspected may be Ecstasy. Police added a possession charge to her rap sheet.

Ferreiro was taken into police custody before being transferred to a local jail. Records indicate that her $5,000 bond was paid and she was released.

Ferreiro is set to stand before a judge on Sept. 26.