A three-year-old girl  was seen hanging from bars on the window of her flat in Xiaogan in Hubei province.

A neighbour, Chen Fangyong, clambered up the outside of the building and used his chest and arms to support the toddler’s weight. 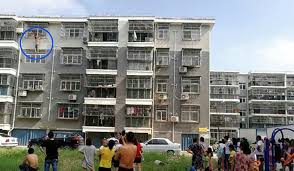 Chen told the news website he was napping at home when he heard a commotion outside and saw lots of people gathering outside the apartment block.

As soon as he saw the child appear to stop moving, he clambered up to help support her.

Neighbours had been preparing to break down the door of the flat after it became clear nobody was at home. They had even prepared a makeshift “air cushion” from several duvets and bedsheets in case the girl fell.

The mother of the child said she was forced to leave the girl at home as the child did not want to go shopping with her.

She knew something was wrong when she saw neighbours gathered under her flat window after returning from the shops. She later rushed over to express her gratitude to Chen.

A video of the incident later went viral on Chinese social media.