Two people were killed and at least 12 injured in a horrific early morning pile-up involving 36 vehicles in the Brazilian city of Sao Paulo.

The crash occurred when a truck carrying ink collided with a lorry carrying scrap metal. 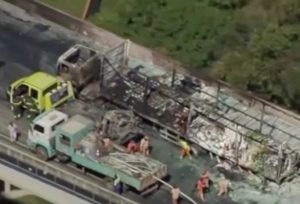 Cars behind them weren’t able to stop in time and the crash soon extended as far as motorists could see.

Flames engulfed both trucks and at least 12 of the cars, with the heavy smoke causing visibility problems. 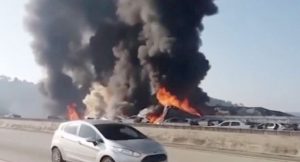 Authorities said one victim was believed to have been struck after he exited his vehicle to avoid the fire.

Another victim died when his car got stuck between the trucks.