Fishermen caught an ‘alien fish’ with strange eyes and pink skin. They had never seen anything like it!

These seasoned fishermen had never seen anything like it in all their years at sea. The captain of the tourist […]

These seasoned fishermen had never seen anything like it in all their years at sea.

The captain of the tourist fishing boat the Dr. Pescado caught this swollen pink creature on one of their excursions near the Los Cabos coast of Mexico. Other fishermen called it an “alien fish,” but just what on earth was it really?

“I was really surprised but what caused most impact were the eyes, so strange,” Rendon told the Pisces Sportfishing Fleet. He said the fish had “raspy skin, three rows of tiny teeth, and three gill slits on each side of the head.” 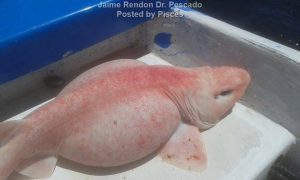 “This particular swell shark is cool to see, but with a lot of species, leucism and albinism are anomalous,” said Dr. David Ebert, director of the Pacific Shark Research Center. “In the bigger scheme of things, this discovery highlights a species that tends to be overlooked and not thought about often. Events like this encourage people to think about sharks that might not be on their radar, so I embrace them whenever they come up.”