See what Prince George will be eating at his new school

SEPTEMBER 07, 2017 The Duke and Duchess of Cambridge won’t have to worry about preparing packed lunches for Prince George now he has started […]

The Duke and Duchess of Cambridge won’t have to worry about preparing packed lunches for Prince George now he has started school. Thomas’s Battersea, where the young royal has been enrolled as a pupil, prides itself on offering seasonal, nutritionally balanced meals for students that provides them with the perfect fuel to get through the day.

The school has a three week menu cycle that is repeated once throughout the school term. The menu changes with the seasons so they offer lighter lunches during the summer and more substantial meals on cold days.

An example menu during the spring months shows that there are a number of meal options for each day, including a meat, fish or vegetarian choice, along with gluten, egg and dairy free meals to cater for children with allergies. The meals have all been devised by a dietician and are all available alongside a seasonal salad bar in the school’s canteen. 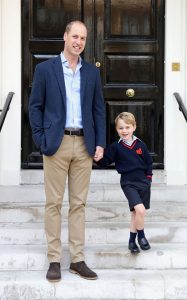 Students at Thomas’s are given a mid-morning snack that may include organic milk or water with fresh fruit or a pain aux raisin, and there is also a freshly made soup of the day and bread on offer each lunchtime. An example lunch menu could see Prince George and his classmates tuck into a turkey and ham pie served with steamed broccoli and cauliflower and oven baked herby dice. Fish options include smoked mackerel on a bed of puy lentils, while vegetarians can enjoy dishes like the chickpea, spinach and sweet potato curry.

The meal is rounded off with a choice of dessert – either fresh fruit platters and yoghurts or dishes such as a Portugese egg tart, tropical fruit smoothie or oven baked oatmeal and raisin cookie served with a banana milkshake.

Prince George arrived for his first day at the prestigious school on Thursday, and appeared a little apprehensive as he approached the gates with his father Prince William. Unfortunately his mum the Duchess of Cambridge was unable to join them on the school run as she is suffering with hyperemesis gravidarum during her third pregnancy.