The Mona Lisa is arguably the most famous woman of art history, having eluded experts with her coy gaze since […]

The Mona Lisa is arguably the most famous woman of art history, having eluded experts with her coy gaze since the 1500s, when she was captured on the canvas of Leonardo da Vinci.

She has inspired songs, films, and countless academic reports, but now experts believe they’ve uncovered another of her kind: the ‘naked Mona Lisa’.

In a shocking development dating back to the 16th century, it seems da Vinci himself painted two versions of the Mona Lisa, one of whom we can see hanging in the Musée du Louvre today. 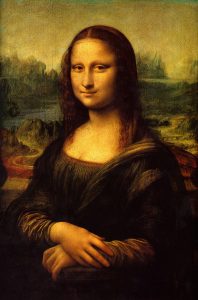 The other was presumably meant for his NSFW archive.

Scientists in Paris have been looking into a charcoal drawing of a woman, shrouded in robes and bearing a striking resemblance in features and composition to the Mona Lisa.

Until now the drawing, titled Joconde Nue, was believed to have been drawn by Leonardo’s students but after weeks of tests, the charcoal drawing has been deemed to be ‘at least in part’ created by Leonardo himself. 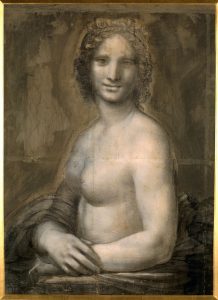 According to the BBC, curator Mathieu Deldicque told AFP:

The drawing has a quality in the way the face and hands are rendered that is truly remarkable. It is not a pale copy.

We are looking at something which was worked on in parallel with the Mona Lisa at the end of Leonardo’s life.

It is almost certainly a preparatory work for an oil painting. 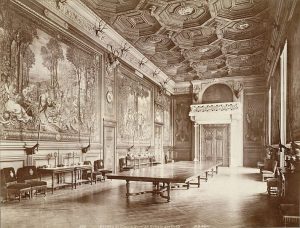 The elegant half-length portrait has been housed away from the flocks of tourists at the Louvre, instead hanging on the walls of the Conde Museum in Chantilly to the north of Paris, where it’s been ever since it was bought by the Duc d’Aumale in 1862 for 7,000 francs.

At the time, the sum was considered to be substantial.

Bruno Mottin, a conservation expert at the Louvre museum, told Le Parisien newspaper the Joconde Nue is an original from Leonardo’s studio and not one of the 20 or so copies of the nude Mona Lisa around the world.

The hatching on the top of the drawing near the head was done by a right-handed person.

Leonardo drew with his left hand.

It is a job that is going to take some time. It is a very difficult drawing to work on because it is particularly fragile.

Scientists echo his sentiment, having pointed out both the body of the women in the two pieces and her hands are remarkably similar. 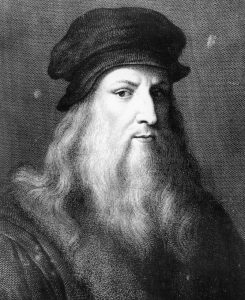 They’ve also noted the two pieces are similar in size, with the charcoal drawing featuring pierced holes suggesting it may have been used as a backdrop to trace a second image.

While, thanks to our modern sensibilities regarding nudity, this may seem shocking to some, artists through history have led the charge in debunking the myth of the female form.

Museum curators hope to have a definitive answer as to who drew the woman before the 500-year anniversary of Leonardo’s death, which will be in 2019. 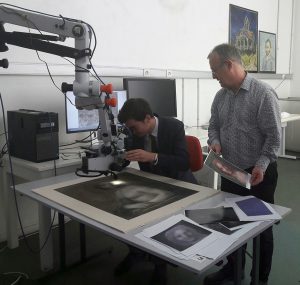 But it seems Mona has some competition.