3 Miami Dolphins kneel during the national anthem while all Saints kneel before, but not during, after Trump warned players to stand

While Miami Dolphins players Julius Thomas, Michael Thomas, Kenny Stills knelt during the anthem, New Orleans Saints players, coaches, and staff knelt before the start of the national anthem but stood in unison once it began at London’s Wembley Stadium on Sunday. 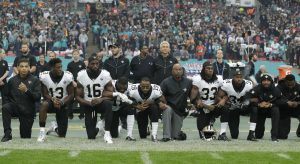 New Orleans Saints players kneel down before the U.S. anthem was played for an NFL football game against the Miami Dolphins at Wembley Stadium in London on Sunday Oct. 1, 2017.

A week ago, demonstrations were organized across the NFL in response to President Donald Trump’s criticism of players who kneel during the national anthem. The Jacksonville Jaguars’ Shad Khan was the first owner to join his players before the game, standing arm-in-arm with them.

Some on the Saints’ sideline stood arm-in-arm on Sunday, and others had their hands over their hearts. On the Dolphins’ sideline, only tight end Julius Thomas, safety Michael Thomas and wide receiver Kenny Stills remained on one knee while Darius Rucker sang “The Star-Spangled Banner.” 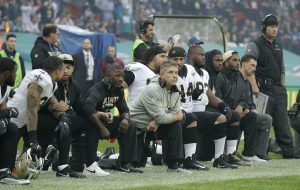 New Orleans Saints head coach Sean Payton, center, kneels with his players and staff before the U.S. anthem was played. 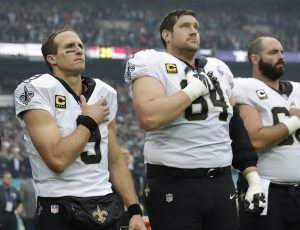 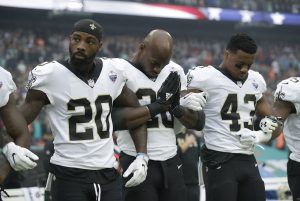 New Orleans Saints running back Adrian Peterson, center, prays as he locks arms with teammates Ken Crawley, left, and Marcus Williams for the US national anthem