At least 20 people are dead and more than 100 injured after a mass shooting at a music festival near the Mandalay Bay casino on the Las Vegas strip.

Police killed the gunman on the 32nd floor of the Mandalay Bay hotel, said sheriff Joe Lombardo as he gave an updated death toll in a press briefing in the early hours of Monday morning.

Lombardo did not release the suspect’s name but said he was a local resident. Authorities were searching for a female companion seen travelling with the suspect before the shootings, he added. Two off-duty officers were among the dead.

Witnesses said they saw multiple victims and dozens of ambulances after shooting broke out on Sunday night during the final performances of the three-day Route 91 Harvest country music festival. 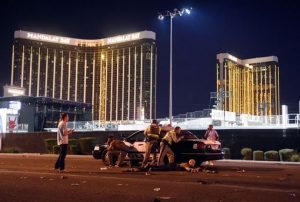 The Mandalay Bay Resort and Casino

Concertgoers reported seeing muzzle flashes from the upper floors of the Mandalay Bay hotel and casino across Las Vegas Boulevard from the festival and the sound of what they described as automatic gunfire.

The shooting began during a performance by country music star Jason Aldean. As the 40,000 people in the crowd began to flee, Kodiak Yazzie, 36, said the music stopped temporarily and started up again before another round of gunshots sent the performers ducking for cover and fleeing the stage.

Some flights have resumed at the city’s McCarran International airport after all planes were temporarily grounded on Sunday evening.