For most people, visiting San Francisco’s Museum of Modern Art isn’t exactly a casual trip. Now you can see some […]

For most people, visiting San Francisco’s Museum of Modern Art isn’t exactly a casual trip. Now you can see some of the art from the museum by just texting the museum and asking.

San Francisco Museum of Modern Art (SFMOMA)  recently rolled out a new feature called “Send Me” that allows anyone to text a request to see something and receive a picture of a piece of art depicting that thing in return.

The ‘Send Me SFMOMA’ service works like this: a user sends an emoji, word or colour describing their mood via text to the museum and the museum sends back a picture of one of its artworks.

“For example ‘send me the ocean’ might get you Pirkle Jones’ Breaking Wave, Golden Gate; ‘send me something blue’ could result in Éponge (SE180) by Yves Klein; and ‘send me ?’ might return Yasumasa Morimura’s An Inner Dialogue with Frida Kahlo (Collar of Thorns), ”  reads the museum’s website. 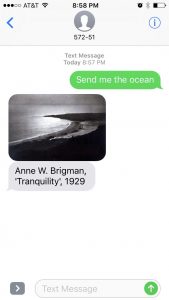 The new service is an attempt by the museum to make more of the 34,678 pieces of artwork in its collection accessible to the public — rather than just the 5 percent on display in the galleries at any given time. 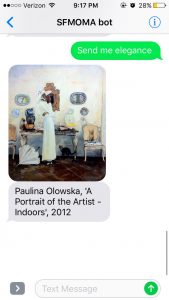