So when North Carolina Army National Guard Staff Sgt. Cory Hinkle witnessed a head-on collision recently while driving home from work, he risked everything to save one of the drivers trapped inside her burning car.

“I knew there had to be injuries, so I parked and ran instantly to the closest car to me,” Hinkle said.

“It happened so fast,” said driver Brandy Guin, who was on her way to her grandparent’s home to pick her children up when a car driving in the opposite direction crossed over the divider and hit her head-on. “They approximated we were going about 45 miles per hour, and I came to a dead stop in three feet. I bent the brake pedal; I was pushing so hard trying to get it to stop.” 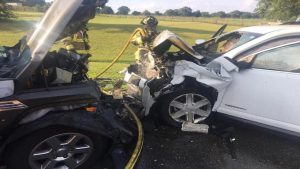 “The airbags all popped from the sides and the front. I tried to put my right foot down … and I saw the bone sticking out of my leg. I had to sit back down and I didn’t know what I was going to do. That’s when he ran up to me,” Guin said about Hinkle.

“I got there in time to grab her and pick her back up. I could smell gasoline … I knew we had to move,” said Hinkle, who carried Guin to the other side of the road. “At that point, I just laid down beside her, because the shocks and tires were exploding. I made her keep looking at me, I made her keep talking.” 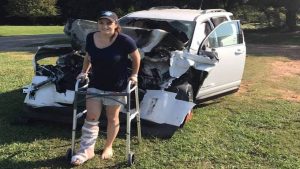 Guin started to panic when the car exploded, but Hinkle rolled over her and used his body as ahuman shield to protect her. “He’s my guardian angel. He deserves all the praise in the world. He’s just an amazing man,” Guin said about Hinkle, who claims he was just at the right place at the right time.

“Anybody that wears the uniform that I wear — any one of them — I’m confident would’ve done the exact same thing in the same situation. The civilians I know would, too,” Hinkle said. “I don’t consider myself a hero. I was in the right place at the right time and I had the training to help keep her calm and the strength to keep her from getting hurt further.”