When a sixth-grade teacher from Carnegie Elementary School in Pittsburg told her students to write about heroes in their lives, 11-year-old […]

When a sixth-grade teacher from Carnegie Elementary School in Pittsburg told her students to write about heroes in their lives, 11-year-old Damon Chiodo knew exactly who he was going to write about—his big brother, U.S. Army Specialist Devin Tomei.

Devin Tomei has been overseas for the past two years maintaining helicopters to ensure the safety of other soldiers during missions.

When it was Chiodo’s turn to read his essay aloud on stage, he started off his essay with “Who is my hero? My hero is my brother.” 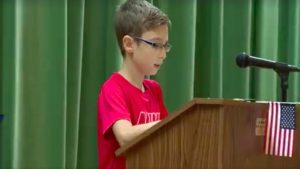 “Hundreds of army missions depend on these helicopters,” Chiodo wrote in his essay. “And my brother must make sure that all of them are safe and ready to fly.” The 6th grader continued, “My brother is brave and smart. He is always there for me, even if I just want to talk. I am very proud of him for choosing to protect me, and everyone in the United States. He is not just my brother. He is also my friend,” Chiodo wrote.

As Damon read his essay in front of his classmates, his hero walked out on stage to surprise him after two long years apart and shared the exciting news that he’ll be home until the end of October. 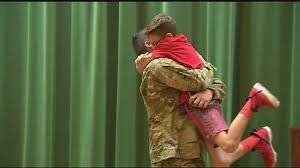 And after the long-overdue visit home, Devin will be sent to Fort Campbell in Kentucky.

He traveled all the way from Germany to Baltimore and finally to Pittsburgh to surprise his little brother after over two and a half years of being apart.

The brothers shared a heartwarming reunion and Chiodo’s reaction was absolutely priceless. 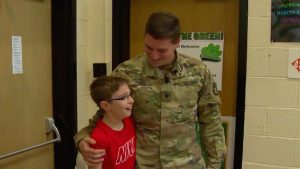 “I’m just honored and this feels great,” Tomei said. “I didn’t think in a million years I’d be able to pull off something like this.”

“I was so happy and I’m still shaking from the happiness,”Chiodo said.