A former private chef has lifted the lid on our monarch’s dining habits and, according to him, there’s one food […]

A former private chef has lifted the lid on our monarch’s dining habits and, according to him, there’s one food that Her Majesty simply cannot stomach.

According to Darren O’Grady, who once had the honour of cooking up the royals’ daily grub, the Queen cannot stand the smell or taste of garlic.

“The Queen would never have garlic on the menu. She hated the smell of it, she hated the taste of it,” he told Marie Claire.

Dishes including the much-loved ingredient were strictly off the menu, meaning you’ll never see Liz secretly ordering a portion of cheesy garlic bread slices on the side of a Domino’s pizza anytime soon.

Royal Chef O’Grady revealed that while the Queen had a few foods she really disliked, she loved dark chocolate so much that she couldn’t help but tuck into a square or two on a daily basis. 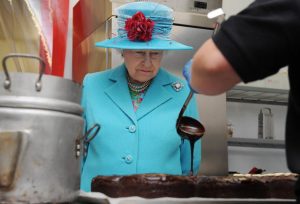 While that might sound terribly down-to-earth, royal mealtimes certainly were not; according to O’Grady, most involved donning a formalwear and being serenaded by bagpipers.

“[The royal family] would come in for afternoon tea by the log fire in outdoor clothes, and then they’d all change for dinner,” O’ Grady divulged.

“They’d come down in dressy ball gowns, and sit at the table — like aDownton Abbey dinner.

“All the fine china was brought out. At the end of the meal, a bagpipe player would walk around the table.”