October 15, 2017 German soccer team, Hertha Berlin, shocked fans when they took a knee on the field before their […]

German soccer team, Hertha Berlin, shocked fans when they took a knee on the field before their Bundesliga match  at home against Schalke 04 Saturday. 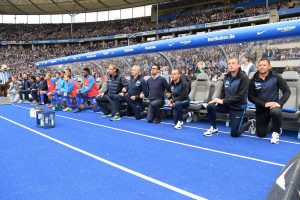 Players in the National Football League have been widely criticized for kneeling during the national anthem in protest of racial injustice in the United States. Hertha Berlin players adopted the act as a message of tolerance and a move of solidarity with the protesting NFL players.

On Twitter, the club said: “Hertha BSC stands for tolerance and responsibility! For a tolerant Berlin and open-minded world, now and forevermore!”

The club’s announcer told fans in attendance: “Berlin is colorful. Hertha BSC stands for diversity and against violence. For this reason, we are joining forces with the protest of our fellow American athletes to take a stand against discrimination. For a tolerant Berlin, both now and forevermore.”

“We are living in the 21st century, not the 18th century, but there are some people who haven’t developed their ideologies accordingly,” Hertha player Sebastian Langkamp told Sky Sports. “If we can give them a bit of help in doing so, then that’s good.”

Many people online praised Hertha Berlin for joining the protest.

Still, many noted how significant the gesture was from Germany.