Little girl, 9, dies after ‘her 325-pound cousin sat on her as punishment’

A 9-year-old Florida girl died after her 325-pound cousin reportedly sat on her as a punishment for acting “out of control.”

Veronica Green Posey, 64, was arrested and charged with cruelty toward a child and homicide for the death of Dericka Lindsay from Pensacola, Florida on Saturday.

While sitting on her, Posey said the girl told adults that she could not breathe. When Posey stood up, she discovered the girl was unresponsive, called 911 and began CPR. 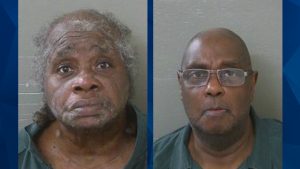 Grace Joan Smith, 69, (left) and James Edmund Smith, 62, (right) were charged with child neglect for failing to act on the abuse. Grace was also charged with cruelty toward a child

Grace Smith was also charged with cruelty towards a child and all three were taken into custody.

Posey was released Monday on $125,000 bond, while Grace and James Smith remained in jail, according to court records.

Florida Department of Children and Families said the agency is investigating Dericka’s death.