WATCH: The Touching Moment An Elephant Is Rescued After After It Got Trapped In A River For A day In Thailand

20.10.2017 An elephant who spent a day trapped in a flooded river in Thailand has been rescued by animal conservationists. The ten-year-old […]

An elephant who spent a day trapped in a flooded river in Thailand has been rescued by animal conservationists. 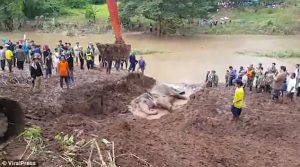 The ten-year-old bull was stranded in the water after heavy rain caused the river to swell on October 17 in Phitsanulok province, Thailand. 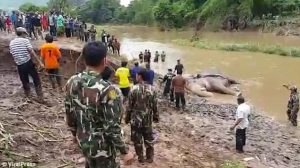 Video shows rescuers at the Thung Saleng Luang National Park pulling the elephant back to shore using rope — the animal unable to move due to the strong current and exhaustion after being stuck in the river for twenty-four hours.


Vet Dusita Chincharoendee Management and Conservation Office said: “It has been a big relief to finally rescue the elephant and get it out of the water.Elephants can usually smell humans and that makes them frightened and excited. There were a lot of humans around so that made the rescue harder. We had to try to tell the villagers to stay away from the water because that was making the elephant even more scared and tired.We tried many different ways to encourage it to leave the water but nothing worked. We had to pull it out manually.”