October 20, 2017 The Duke and Duchess of Cambridge have announced the due date for the royal sibling to Prince George and […]

The Duke and Duchess of Cambridge have announced the due date for the royal sibling to Prince George and Princess Charlotte.

“The Duke and Duchess of Cambridge are delighted to confirm they are expecting a baby in April 2018,” read a statement posted on Kensington Palace’s Twitter account on Tuesday, October 17.

The royal couple announced on September 4 that they are expecting their third bundle of joy. 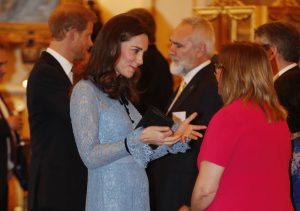 “The Queen and members of both families are delighted with the news. As with her previous two pregnancies, the Duchess is suffering from Hyperemesis Gravidarum.”

“Her royal highness will no longer carry out her planned engagement at the Hornsey Road Children’s Centre in London today. The Duchess is being cared for at Kensington Palace.»

Earlier this month, the duchess made her first public appearance since announcing her pregnancy. She debuted her tiny baby bump in a lace dress at a reception at Buckingham Palace in honor of World Mental Health Day on October 10.