Elephant Nature Park is a unique project set in Chiang Mai province, Northern Thailand. Established in the 1990s by, Sangdeaun “Lek” Chailert (“Lek” means “Shorty” in Thai), their aim has always been to provide a sanctuary and rescue centre for elephants. 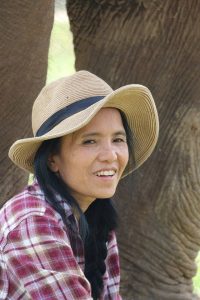 Elephant Nature Park is an elephant rescue and rehabilitation centre in the Chiang Mai province of Northern Thailand where you can volunteer and visit to help.

The park has been involved in dozens of rescues which have created our thriving elephant herd. The park provides a natural environment for elephants, but also dogs, cats, buffaloes and many other animals are under their gentle care.

Elephant Nature Park welcomes volunteers and visitors to contribute to the healing process while learning about the animals lives, past and present. Elephant Nature Park has sister projects in other parts of Thailand, and also in Cambodia and Myanmar which you can also visit or volunteer for a longer stay.

During her childhood she had ample opportunity to spend time among a variety of animals. Her grandfather was the shaman (a traditional healer) who not only helped the people of his community, but would also tend to sick and injured animals. 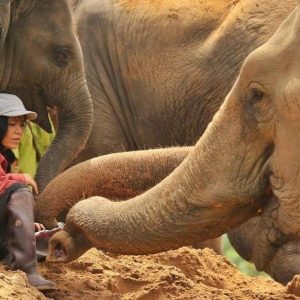 Her grandfather allowed Lek to be part of his work sometimes and would let her participate in his healing of the animals. She discovered that all animals strive to live well and Lek became determined to work to protect animals. It’s not only the elephants she loves, and she helps all kinds of animals that she finds and provides a safe home for them.

With a love and respect for her country’s national symbol, and the knowledge that they were becoming endangered, Lek began advocating for the rights and welfare of the Asian elephants in Thailand. In an industry steeped in tradition, advocating for positive change in the ways domestic and wild Asian elephants are treated has not been an easy battle. 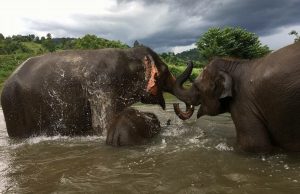 However, with hard work and determination her voice is now internationally recognised. In addition to several documentaries produced by National Geographic, Discovery, Animal Planet and the BBC, Lek has also won many honorary awards.

“Lek” is the Thai word for “Shorty” but she is certainly not short on spirit, compassion, determination, and her love for animals is clearly as big as an elephant.