5 November 2017 Tatler magazine has issued an apology to Downton Abbey star Daisy Lewis after describing her as “fun… in bed. Probably”. […]

Tatler magazine has issued an apology to Downton Abbey star Daisy Lewis after describing her as “fun… in bed. Probably”.

In the November issue of the style magazine’s ‘Little Black Book’ feature, which publishes profiles of “the smartest, sexiest singles on the planet”, a prominent image of Lewis was included.

The caption read: “As Daisy is quite small, you might be tricked into believing she’s quiet. LOL. She isn’t. This actress is loud. Which makes her fun at a party. And in bed. Probably.”

Lewis tweeted a photo of the page on 3 November and wrote: “I’m really shocked and upset by this. But thankfully I’m ‘loud’ enough to say it. Does anyone at Tatler read the news?” 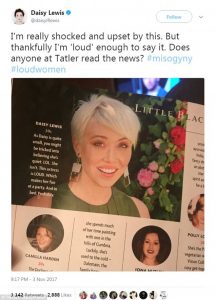 Tatler’s official Twitter issued an apology the following day, writing: “Tayler apologises unreservedly to @daisylflewis. We will also be publishing a full apology in the next issue.”